As part of this series dedicated to mastering the art of buoyancy, Claudia Perucchini tells us of her first experiences trying to find neutral buoyancy, and how she realized that it is the fundamental skill for relaxed, happy and safe scuba diving. Join us as we take a look at what neutral buoyancy is, what the benefits are, why we teach it, and the fun that comes along with mastering it.

Ever since I was a child, I have always loved the water. I spent my youth at the seaside or in the swimming pool. I remember so clearly finding it strange that I struggled to float on the surface of the swimming pools when it seemed easy when I was bobbing in the sea. It’s a childhood conundrum that we don’t tend to think too much about, and just accept. And at some point it just happens, without us realizing it or trying too hard, and we are floating too. It’s an incredible feeling!

When we scuba dive, we learn about floating on the surface using scuba gear, and how to distinguish between positive, negative and neutral buoyancy. But what is buoyancy and how does it affect us as divers?

What is Neutral Buoyancy?

The website study.com, which I use when helping my daughter with her homework, tells us: “Buoyancy is the ability or tendency of an object to float in a fluid, which can be a liquid or a gas. Archimedes’ Principle is how we put a number to the buoyant force. The buoyant force on a submerged object is equal to the force of gravity on the liquid displaced by the object.”

In other words, whether an object (or a diver) floats, sinks or is neutrally buoyant depends on the amount of water it/he/she displaces. An object will float if the gravitational (downward) force is less than the buoyancy (upward) force. To make it really simple, an object will float if it weighs less than the amount of water it displaces. This explains why a rock will sink while a huge boat will float.

This means that for a diver to float in midwater they have to displace the same amount of water they weigh, including their equipment, as well as taking into consideration whether they are in fresh or salt water. This effect is known as neutral buoyancy.

To mimic the weightlessness that would be felt in space, astronauts train in a special 40-foot-deep (12-metre-deep) swimming pool in the Neutral Buoyancy Laboratory at NASA in Texas. They say of their facility, “The pool is called the Neutral Buoyancy Laboratory because astronauts and objects are not weightless; they attain neutral buoyancy. That condition exists when objects have an equal tendency to float or sink. They seem to hover, rather than bob up to the surface of the water. Since people in swimming pools tend to float to the surface, astronauts (and other objects) are weighted so that they neither float nor sink — that’s neutral buoyancy.”

When astronauts practice below the surface in neutrally buoyant conditions they train for the zero-gravity environment of space. 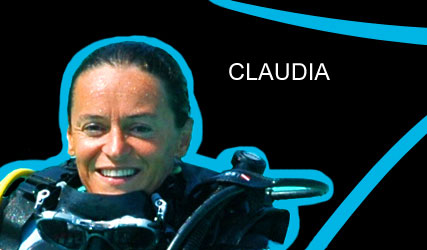 Let’s move away from the physics of buoyancy for a while, and let me tell you a story. For years I had thought that floating in midwater must be easy, as effortless as the scuba divers that I watched made it seem. The very first time I tried scuba diving – on a cold April day in an outdoor pool in Yeovil – I entered the water, listened to the instruction to deflate my BCD… and sank. I swam and swam and kept on swimming as I sank deeper.

It wasn’t the most successful first experience but was certainly thrilling enough to make me decide to go to the Caribbean, enrol in an Open Water Diver course and learn how to dive. I still remember being absolutely fascinated by my instructor as she remained perfectly still, floating midwater almost without moving her fins an inch. I, on the other hand, was kicking my fins like a maniac as I felt myself sinking one moment and the next heading to the surface. This yo-yo rhythm was how I began my diving career, and I was determined to change it.

I remember feeling stressed as every dive proved more and more challenging and I didn’t seem to improve the control of my buoyancy. I felt clumsy. I was embarrassed when the other divers in my group had to cut their dives short because I had consumed my air supply faster than anyone else. My movements were fast, jerky and my arms were constantly moving trying to keep me in position. Little did I realise that the more I moved them the more difficult it was for me to control my body position. I knew something was missing, and felt frustrated that I couldn’t work out what it was.

The Most Valuable Dive Skill of Them All

Alexis was my instructor during my Advanced Open Water course and he made me start my series of adventure dives with a Peak Performance Buoyancy (PPB) dive. Compared to the other, more exciting-sounding adventure dives that we had planned, this seemed as though it would be the most boring part of the course. But I was wrong. As the lesson proceeded I realised that a new world was opening up to me, and I was finally starting to grasp the concept of buoyancy.

Alexis made me practice a series of exercises in shallow water so I could feel safe but challenged at the same time, assuring me that if I learnt to master my buoyancy in just a few meters of water I could control it at any depth. The exercises were fun and proved effective right away. As we dived into slightly deeper water I could feel the change of pressure and the effect it had on my buoyancy. I was able to adjust my equipment with small changes and found myself finally swimming slowly without fearing that I was sinking or bobbing up to the surface. What a relief!

Like all skills, it took hard work to finally master neutral buoyancy. There was that moment of perfect bliss when I finally felt that I belonged to the underwater realm. Trust me, the feeling is unbeatable. All of a sudden I was back to being that child who couldn’t figure out how to float on the surface one summer and the next was suddenly able to. It was pure joy, and it allowed me to explore below the surface feeling relaxed.

Learning about PPB was by far one of the most important skills I could possibly acquire as a scuba diver and I can say for certain that it has changed not just the way I dive but the way I feel whilst diving.

©Photo by African Dive Adventures Every June along South Africa’s coast, a sense of anticipation …

We consider ourselves incredibly lucky at Dive Butler. We get the opportunity to go and …