Diving with Sharks in French Polynesia 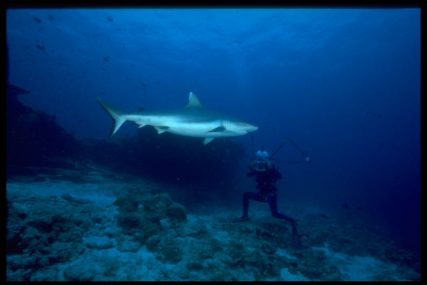 When Blue Planet II drew to a close, we were left reeling. The acclaimed BBC natural history documentary series has once again astounded us, bringing to life the characters that inhabit our vast oceans. One of the standout moments of the series took place in the midst of the Pacific Ocean, beneath the turquoise waters of French Polynesia. In the episode, groupers arrived in their thousands, biding their time until the lunar tide was just right to spawn in great white clouds – a natural phenomenon occurring once a year. In the water around, the documentary also captured a staggering number of sharks, not in their tens but in their hundreds, schooling together in a rich soup of nutrient-infused waters. It’s quite a sight.

If there is one man to ask about sharks in French Polynesia, it is our very own Alexis Vincent. As the co-founder of Dive Butler, Alexis is a regular visitor to these pristine waters – and to their residents. He led me beneath the waves in search of the world’s most magnificent and misunderstood aquatic predator. 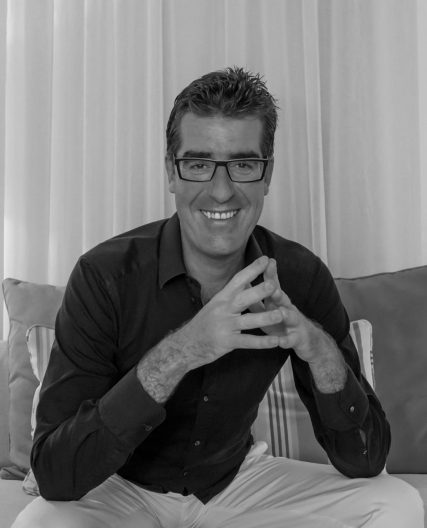 “I was holding onto the reef hook with my left hand” recalls Alexis Vincent with a smile. It was one of his most memorable dives in French Polynesia. “My regulator was in free-flow because of the current. In my right hand was a video camera. I wasn’t going to let go; it was just too thrilling not to capture it. I ended up right in the middle, being jostled about by hundreds of sharks as they went about their business.”

“I’m fascinated by sharks” Alexis says. “They’re just perfect. Gorgeous to look at, so energetic and surprisingly frugal eaters. It’s fascinating to see how they move and eat and act.”

Speak to Alexis and his passion for sharks is palpable, although he acknowledges that this enthusiasm isn’t widely shared. “My view on sharks is a particular one. We look mad to the outside world.”

What Alexis is referring to is the widespread and irrational fear of sharks. Since Jaws first instilled terror into the hearts of millions in the 1980s, sharks suddenly found themselves the unwitting villains of the seas. Their reputation as indiscriminate killers has not improved in the decades since, despite the sobering fact that sharks kill less than 10 people a year. Humans, meanwhile, kill between 100 and 200 million sharks a year, mainly to make shark fin soup.

When Peter Benchley wrote Jaws, it became his most famous legacy. Yet he would spend the rest of his life undoing the wrongs that the book and movie unleashed on shark populations across the globe. He campaigned tirelessly for their conservation, urging others to see them as magnificent, powerful, apex predators vital to the survival of our seas. Benchley’s biggest success was ultimately his biggest regret.

“As apex predators, sharks are at the top of the food chain,” Alexis explains. “That means their existence is crucial to the survival not just of our oceans, but of our planet.” Sharks control the fish populations and their spatial habitats, which in turn maintains seagrass, corals and reef habitats. When shark populations decline, fish populations increase and the entire ecosystem is disrupted: coral reefs and seagrass beds are lost and commercial fisheries fail as larger predatory fish numbers increase in search of new food sources.

With such a grim potential future facing sharks, it is easy to see why divers like Alexis find the abundant and flourishing populations that inhabit the waters of French Polynesia so alluring. He recalls one of his many dives in French Polynesia’s current-filled channels. “You look and see dozens of sharks, and behind them, swirling schools of fish. But look again… not fish but more and more sharks, as far as you can see”.

Covering an area the size of Europe, French Polynesia is a vast expanse of navy blue Pacific Ocean where over a hundred pin-pricks of sand peek above the surface. The atolls here are the thing of dreams, the quintessential tropical paradise with names like Tahiti and Bora Bora, where thatched and stilted resorts reign supreme. Endless white sandy beaches, cascading waterfalls tumbling down tree-blanketed cliffs and warm, friendly people, proud of their heritage and their homeland where sky and sea melt into one. “This is where the first overwater villas were created” reveals Alexis. “It is the ultimate romantic destination that has somehow been forgotten, eclipsed by easier-to-reach destinations like the Maldives”.

Seen from above, French Polynesia’s atolls are a dazzling splash of blues and greens, broken only by tiny blips of sand forming rings, or atolls. The atolls are impossibly picturesque. Look below the surface and you’ll see the unique geography that supports the flourishing of sharks, dolphins, fish and corals. Like great shallow bowls of turquoise, the atolls’ warm waters are a paradise for plankton too. On the lunar tides, this nutrient-rich water pours through deep channels, gushing into the deep cold waters on the outer side of the reef. And it is here the sharks congregate.

Diving in French Polynesia isn’t for the faint-hearted, says Alexis. And it’s not, as most may immediately think, because you are surrounded by schools of up to 500 fearsome predators. “The sharks don’t pay the slightest bit of attention to you” he explains. “You’re not part of the food chain, so why would they? In fact, sharks are incredibly sensitive to sound, they don’t like all the bubbles. So there is no chance of you being mistaken for a fish when on scuba”.

The challenges here are the rip-roaring currents created as the water funnels through the channels. “At one point I felt like I was cart-wheeling through a narrow channel” says Alexis. Diving is conducted on the outgoing, slack tide. With one of Dive Butler’s experienced guides, you begin in the calm, warm waters of the inner atolls and allow yourself to soar through the channels and be spat out on the other side. Here you are greeted by the sight of hundreds of sharks lying almost motionless in the washing machine of current swirling around them. Reef hooks are a must, allowing you the chance to eke out this exhilarating encounter. “When the shark struggles against the current, you know it’s strong”, says Alexis.

On the island of Fakarava in the Tuamotu Atolls, the Tumakohua Pass is the stuff of shark-diving legend. In fact, says Alexis, it’s one of the best dive sites on the planet, full stop. Its vast lagoon encloses a thriving and abundant ecosystem, now designated an UNESCO Biosphere Reserve. Allow the currents to take you through the channel and descend to around 28 metres, where more than 300 sharks await. Grey reef sharks form the bulk of the mass of silver bodies, but it is also common to see white tips, black tips, oceanic white tips, silk sharks, silver tips, tiger sharks, lemon sharks and hammerheads; over 30 species in total.

With its enormous scale, French Polynesia’s diving opportunities are truly boundless, especially for those who enjoy the freedom that comes with a superyacht. On the Rangiroa Atoll in the Tuamotus, the Tiputa Pass draws in great schools. A circus not just of sharks, but bottlenose dolphins, jackfish and manta rays. “The dolphins bring you pieces of coral,” says Alexis, laughing. “They want to play and dance with you”.

As well as the famous dive sites, Dive Butler takes guests to explore virgin reefs and un-dived channels. Apataki Pass in between Fakarava and Rangiroa is a firm favourite of Alexis’, where hundreds of sharks jostle for space in a 20-metre-wide channel. “There are so many atolls to choose from,” says Alexis. “There are many where people just don’t dive, waiting to be explored. Islands where there aren’t even any inhabitants.” 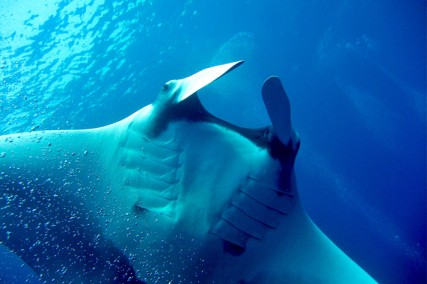 It isn’t just sharks either. The ocean here is alive with marine life. Manta rays congregate in the coral atoll of Manihi, wheeling in great feeding circles 30-strong. Migrating humpbacks pass through Rurutu in the Australs where divers and snorkelers can get eye to eye with the gargantuan mammals. From the great underwater canyons of Moorea to Fitii Pass in Huahine, the waters are bursting with life. Indeed, Jacques Cousteau once called the Tikehau Atoll in the Tuamotus the richest place on earth.

So why are the sharks and marine life of French Polynesia thriving? The answer is simple, says Alexis; “The region’s remoteness protects it. Despite technology and modern fishing boats, French Polynesia in the heart of the Pacific is too far and too costly for fishing fleets, so the sharks are protected”.

When talking to Alexis, it is impossible to not get swept up in his genuine love, passion and energy for sharks. Through Dive Butler, his desire to share the magnificence of the marine world is being realised. Guiding superyachts through the most remote and wild locations in search of the healthiest and most abundant ecosystems is more than a dream. It is a calling. One he shares with his team, who dedicate themselves to providing bespoke, luxurious and expert dive expeditions for superyacht guests. 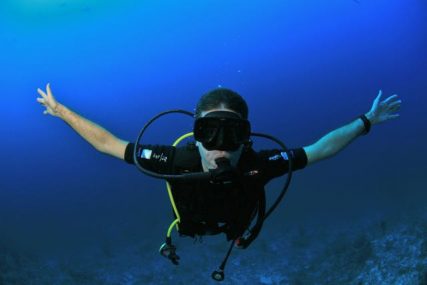 French Polynesia’s waters are a haven for sharks and marine life, where they thrive in an abundance not seen anywhere else on the planet. Go now, and see what our oceans should really look like. “Sharks are integral to our ecosystem and survival, they are the lions of the oceans” says Alexis. “The sheer numbers in French Polynesia are unbelievable, and every single dive is memorable. It is an amazing show.”